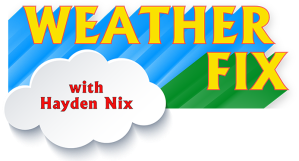 LITTLE ROCK, Ark. – Students in Arkansas will be continuing their education online and through AMI Days for the remainder of the 2019-2020 school year due to the COVID-19 pandemic.

This is a hard time for everyone, so the Arkansas Storm Team wants to do something to help! We will be providing a weekly weather education lesson, teaching students about a specific topic and showing how to create a fun science experiment at home.

This week’s lesson is our final one for the 2019-2020 school year. We hope to revisit this idea when school starts back up again.

Lesson 7 discusses the different types of fog and a complex experiment to show how fog forms (parents helps required).

Did you know there are eight different types of fog? Let’s go over them.

Radiation fog forms when the air temperature meets the dew point (measure of moisture in the air). Humid nights are ideal to get this fog to form. The wind must be light as well.

Precipitation fog forms when rain is falling through cold air. Some of the rain evaporates and causes the dew point to rise to meet the air temperature.

Advection fog forms when warm, moist air blows over a surface that is cooler.

Steam Fog forms during the fall when large bodies of water are still warm. Cold, dry air moves over the body of water creating steam fog.

Upslope Fog forms when warm moist air moves up the side of a mountain. As air rises, it cools and causes water vapor to condense.

Valley Fog forms similarly to radiation fog. After it rains, warm moist air interacts and cools from all the cold air sinking into the valley.

Freezing Fog is similar to radiation fog but occurs below freezing (32 degrees Fahrenheit) . When the drizzle from the fog comes into contact with an object, the droplets will freeze.

Ice fog is not seen in the state of Arkansas! It is only seen in polar and arctic regions. This fog forms when temperatures are actually too cold for air to have super cooled water droplets form, so instead it forms tiny ice crystals.

*Parents are absolutely needed for this experiment for safety purposes. Boiling water can burn and cause serious injury. Gloves should be worn at all time while handling the dry ice. Without special glove-ware, dry ice can cause frostbite quickly.*

Step 1: Boil four cups of water in a pot or water heater.

Step 2: Place aluminum pan on a table or sturdy surface.

Step 3: Put on safety gloves and put a chunk of dry ice into an aluminum pan.

Dry ice is carbon dioxide. It does not work like water. Unlike water, it does not freeze at 32 degrees. Instead, it freezes near 109 degrees below zero.

In this experiment, the carbon dioxide is going to snatch the warm and humid air just above the water and create a quick reaction – causing the solid to form a gas, skipping the liquid stage because the chemical reaction is so quick.

Notice, fog slowly starts settling closer to the floor rather than moving up in the air. This happens because the dry ice is cooling the water down. The fog is relatively colder than the surrounding air in the room. Colder air is more dense than warm air, therefore it stays near the ground while warm air rises.

To view all our Weather Fix Wednesday lessons, click here.

Trump to leave Washington on morning of Biden’s inauguration

What else is in Biden’s $1.9T coronavirus plan?

During the school year, the Arkansas Storm Team is out in the community helping to provide fun weather education. Given our current situation across the world, we are not able to be out physically but we can be there virtually! In a limited series, we will be providing weather lessons right here online every Wednesday at 1 PM! Please share with teachers, family and friends!