LITTLE ROCK — A couple of familiar faces were welcomed back into the Arkansas Razorbacks’ fold during week 10 of practices, signaling that preparation for the second season of the Eric Mussleman era is steaming ahead with the start of the 2020-21 campaign (Nov. 25) exactly two months out.

First, the Hogs crossed the street from their performance center in Fayetteville as they opened the week practicing at venerable Bud Walton Arena, their first on-court action on their homecourt since Senior Night on March 4 against LSU — a 99-90 Arkansas victory.

Second, and more importantly, fourth-year junior J.D. Notae (left wrist injury) on Thursday returned to live, full-contact practice for the first time since the 2019-20 season when he redshirted following a transfer from Jacksonville. Notae had been limited in practice for weeks, and at the beginning of week 10 he had some of his playing restrictions lifted leading up to his first full practice on Thursday.

Notae (6-1 combo guard) drew positive reviews for his offensive ability that he consistently put on display during practices last season. In his final year at Jacksonville — an NCAA Division 1 school in Florida and member of the ASUN Conference — Notae started 23 of 32 games and averaged 15.5 points (nearly identical to his freshman season of 15.4 points per game) to go with 6.2 rebounds, 3.4 assists, and 1.6 steals while shooting 42.7% field goals (including 62-of-194 from 3 for 32.0%) and 73.0% free throws in 29.1 minutes as a sophomore in ’18-19.

Musselman added that when Notae is playing on the ball as the primary handler to trigger the offense, he’ll be used in various pick-and-roll scenarios to maximize his playmaking ability. Arkansas must replace nearly 60 points per game that the departed Mason Jones, Isaiah Joe, and Jimmy Whitt, Jr., combined to bring to the floor in ’19-20.

Here’s more from week 10 of practice …

* A trio of veterans — sophomore Connor Vanover (7-3 stretch-5), senior Jalen Tate (6-6 guard), and senior Justin Smith (6-6 combo forward) — are forging roles on a team that has 10 scholarship players (out of 12 total) who will play as Hogs for the first time in their careers.

— Vanover is known as a face-up shooting threat beyond the 3-point line, but Musselman pointed out that Arkansas will often count on Vanover producing down low offensively. “His hook shot is getting better,” Musselman said. Vanover’s combination of height, length, and accuracy as a shooter make him a scoring threat in both low- and mid-post scenarios. Vanover finished his freshman season on a high note at Cal in ’18-19, moving into the starting lineup in the last three games of the regular season as he helped halt a 16-game losing streak by averaging 17.3 points, 6.0 rebounds, and 2.7 points in 28.0 minutes per game as the Bears closed out the regular-season with three consecutive wins.

— Tate is a “pass-first point guard” and during practices “the flow is good” with him initiating the offense, according to Musselman. The grad-transfer from Northern Kentucky is likely to play a similar role to the one Whitt played last season as a grad-transfer: A defensive stopper at one end and a primary handler and opportunistic scorer on the other.

— Smith continues to be Arkansas’ most consistent player at both ends of the floor in the estimation of the Head Hog. The grad-transfer from Indiana — he’s coming off career-high averages (10.4 points, 5.2 rebounds, and 30.4 minutes per game) last season, and he started 64 of his last 67 games as a Hoosier — appears to be locking up a starting role with the Hogs in ’20-21.

* Double-down. The NCAA Divison 1 Council last week voted to increase on-court practice time from 4 hours to 8 hours per week beginning on Monday, and the Hogs took advantage of the extra time in week 10 of practice that was played inside BWA. The Hogs continue to get 4 hours per week in strength-and-conditioning work. The NCAA also voted to allow teams to increase on-court practice time to 20 hours per week beginning on Oct. 14, which is six weeks prior to opening day (Nov. 25) of the ’20-21 college basketball season.

— Just like every season since the league expanded to 14 teams, there will be an 18-game SEC slate (although it has not been clarified, it is assumed this will remain as a six-opponent round-robin format with three more home games and three more road games).

— There will be two open dates following the start of league play, one of which will serve as game day for the 10 annual Big 12 / SEC Challenge matchups (to be Jan. 30 according to reporting by CBS Sports college basketball analyst Jon Rothstein) with the four teams not participating in the Challenge playing against each other in league games on the same day, and the other open date will presumably be for playing makeup games should the need arise. Arkansas is expected to play once again in the Big 12 / SEC Challenge, this time on the road although matchups for the event have not yet been announced.

Given the NCAA’s guidance last week that the ’20-21 season will be limited to 27 games (that’s 24 or 25 games plus 2 of 3 more via multiple-team exemption tournaments), and subtracting out the SEC’s 18-game schedule and the Big 12 / SEC Challenge that Arkansas is expected to play in this season, it leaves the Hogs with as many as 8 non-conference games that can still be scheduled. Again, 2 or 3 of those can be played as part of an MTE event. With Louisville having recently dropped out of the 4-team, 2-game MGM Resorts Main Event in Las Vegas, it could be a matter of time before Arkansas also drops out while exploring options to play in a different MTE that is closer to home.

An MTE event at BWA in Fayetteville as well as the potential to play an in-state D1 opponent could both be on the table as Arkansas considers as many viable options as possible to add non-conference games (for a more detailed breakdown of the Razorbacks’ known non-conference opponents prior to the new guidances and how those games might be affected, click the link for my Sept. 16 article published at Hogville.net … https://forums.hogville.net/index.php?topic=714186.0).

* Notorious BWA! While it may seem like a practical and mundane transition to leave the performance center for some practice time at BWA, the history and significance of the Razorbacks’ home arena is not lost on the family of freshman guard Moses Moody of Little Rock.

The highly regarded Moody has had a strong camp so far for the Hogs, and he and his parents are no strangers to BWA as they have been visitors taking in games there for years. Last season, the court was named in honor of Naismith Hall of Famer and former head coach Nolan Richardson, who in 1993-94 led the program to its only college basketball national championship coinciding with the first season that BWA opened its doors — the proving grounds for so many memorable games that helped Richardson cement the Hogs among the elite national programs of the ’90s. 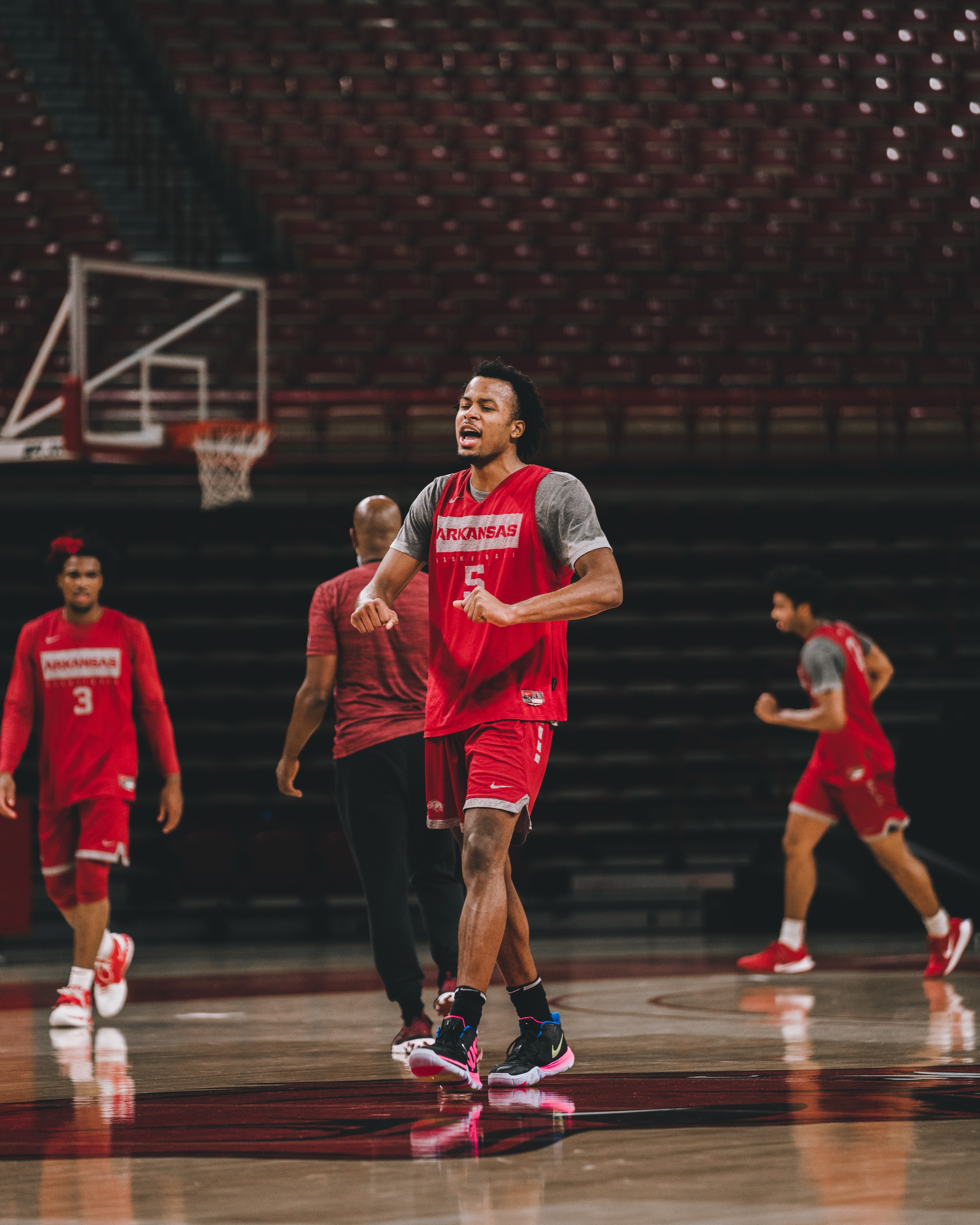 FAYETTEVILLE -- As expected, junior cornerback Montaric Brown has practiced and is ready to return to action.

Brown has been limited to two games this season. He was injured against Mississippi State and hasn't played since then. He has six tackles, a tackle for loss, one interception against Georgia and a pass breakup. Brown's return means he will team with redshirt freshman Hudson Clark at the corners.

FAYETTEVILLE -- Arkansas will need its offense to be clicking on Saturday night when they take on No. 8 Texas A&M in Kyle Field.

The offense seems to be getting better each week, but will need to be at its best for the Hogs to stand a chance against the talented Aggies. One area on offense where the Hogs are clearly needing to improve is the running game. Sam Pittman was asked how do you fix the running game?

FAYETTEVILLE -- Most stadiums in the SEC are greatly limiting the number of fans attending games because of concerns about COVID-19.

Florida head coach Dan Mullen talked about the large crowd in College Station and Sam Pittman said he expects 50,000 fans at the Arkansas game there on Saturday night. Arkansas quarterback Feleipe Franks isn't concerned with how many fans the Aggies pack into the stadium.

Arkansas ranked one of the lowest for breast cancer screenings

Ranger on a two-week hike for awareness for Foster System

Good Samaritan struck and killed while helping others on I-30