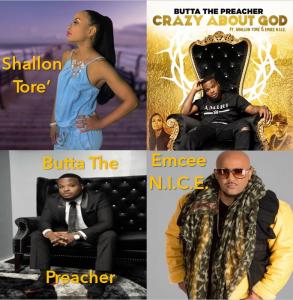 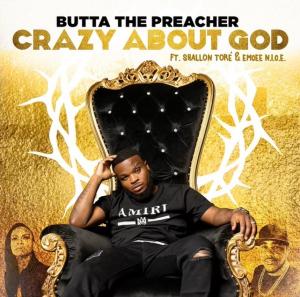 UNITED STATES, August 27, 2022 /EINPresswire.com/ -- Just 2 days after releasing the song, Crazy About God (CAG), Butta The Preacher ranked at the top of the global music charts! This new hit single features international singer/songwriter Shallon Tore’ and multi-award winning recording artist Emcee N.I.C.E. Butta The Preacher says this song is the “Holy Anthem and the #CAG movement will sweep across the globe.” “No matter who you are or where you are from”, says Shallon Tore’, “this song will get out of your funk, out of your seat, and up dancing with everything you have left. This song is an authentic uncompromised message about God’s love.” From the home, to the streets, to the club, and to the church, Crazy About God has everyone going crazy with its infectious beat, killer vocals, and genius rap lyrics for a combination unmatched in music industry today. The talent on this new single was a wonderful combo and the response from listeners and radio stations has been amazing! Within the first week, this song has achieved Amazon Music’s Top 5 new release hip hop and rap sales. This means that Crazy About God is destinated to be at the top of the U.S. and international charts from rap/hip hop to Christian music charts. Crazy About God is being played on major radio stations around the world, and can be purchased and streamed on all digital music outlets.

Crazy About God (CAG) single is just the beginning! A CAG Live Concert Tour will soon be in concert hall near you and will first take off In Honolulu, Hawaii in November of 2022. This highly anticipated event is expected to quickly sell out. New and existing music from Butta the Preacher, Shallon Tore’, Emcee N.I.C.E., and special guest will leave fans entertained and wanting for more. Follow social medial links below for future updates on concert dates, locations, and times.

Emcee N.I.C.E., is an American Christian hip hop recording artist, musician and author. He has served as a producer, writer, and recording artist. Since 1994 after being discovered by Paul Stewart and signing with Bruce Carbone & Mercury Records, he has been credited on over 70 different records and five #1 hit records on the Billboard charts in "I Got Angels” claiming two positions along with "Glory to God" (ft. Fred Hammond) & Nielsen BDS including a #1 gospel album in Praise. He has worked with artists such as 2 Pac, Nas, A Lighter Shade of Brown, Aaron Hall, K-Ci Hailey, Doctor Fink, Al B. Sure, Melissa Molinaro, MC Lyte and Fred Hammond. He is currently starring in Da Jammies as "Novelist" that started on Netflix now on Amazon Prime, Roku, Xfinity, Apple TV, Cox.

Butta The Preacher is a native from Gary, Indiana. At 21-years-old, Butta The Preacher was shot 9 times and left for dead but he survived. Not long after that, he was hit by a drunk driver after which he flatlined and was brought back to life. Upon waking, when the doctors asked him what his name was, he simply replied, "I'm a preacher"! And he’s been preaching and teaching the Gospel ever since as a minister, song writer, and chart topping Christian hip-hop artist and motivational speaker. His story has touched lives all over the world and now it's coming to widen that influence and impact on the big screen as the Executive Producer of Butta The Preacher The Movie expected to release 2023.

Shallon Tore’ (a.k.a “The Singing Doctor”) is a captivating American urban contemporary gospel singer/songwriter and inspirational speaker. She is also a board-certified medical doctor. She released her first gospel album, “Far Above” December 2020 through her private label Shallon Toré Music. Sharing the love for God with the world is her priority! Her producer, Miklos Malek, has worked with artists such as Arianna Grande, Jennifer Lopez and Faith Evans and she also worked with Philip Scott, Grammy-Award winning sound engineer. Shallon Tore’ has a large following on social media and is inspiring hearts all over the world. Follow her social media to be the first to learn about her new singles that are expected to drop winter 2022 and new album release February 2023. Shallon is also a professional dancer with experience as a former Soul Trainer dancer in 2003 and has performed as a salsa dancer in the U.S., Amsterdam, and Japan.

To Learn More About Each Artist Please Follow Social Media Links Below:

For inquiries or corrections to Press Releases, please reach out to EIN Presswire.
✕
× Close Ad