Czechoslovak Group (CSG) announced the acquisition of a 70% stake in Fiocchi Munizioni, a global leader in premium and super premium small caliber ammunition. CSG will partner with the current shareholders, the Fiocchi family and Charme Capital Partners, each retaining a minority stake, to pursue the continued growth path envisaged for Fiocchi Munizioni over the coming years.

MILAN and PRAGUE, Nov. 25, 2022 /PRNewswire/ -- Founded in 1876 in Lecco, Italy, Fiocchi Munizioni designs, manufactures and sells premium and super-premium small caliber ammunition for shooting sports (brand of choice for top athletes, including Olympic games winners with 33 medals), hunting and law enforcement, under the iconic Fiocchi, Baschieri & Pellagri and Lyalvale global brands. Fiocchi Munizioni is one of the few global players with three fully vertically integrated industrial and commercial platforms in Italy, the US (where Fiocchi has been directly present for more than 40 years) and the UK. Fiocchi has a wide range of proprietary product and process technologies in critical areas, including rare primer production capabilities, developed through a continuous in-house proprietary innovation activity. Fiocchi Munizioni is expected to record consolidated revenues exceeding Euro 380 million in 2022 and employs more than 1.300 people worldwide. 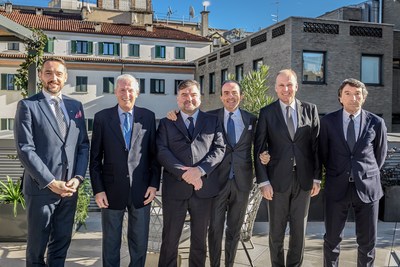 CSG, based in Prague, Czech Republic, is a diversified industrial group active in five strategic business segments, aerospace, defense, automotive, railways and business projects, where it operates at a global level. CSG is 100% controlled and led by Michal Strnad, who has transformed it into the most relevant Czech industrial group with a strong international footprint. CSG employs more than 8.000 people worldwide and it owns and manages a diverse portfolio of industrial and trade companies across the civil and defense sectors. Over the years, CSG has entered various strategic partnerships with top-tier European and US multinational companies including General Dynamics, Siemens, Stadler, Raytheon, Lockheed Martin, Boeing, Airbus, Nexter Systems and Rheinmetall.

The transaction envisages the acquisition of a 70% stake in Fiocchi Munizioni by CSG in partnership with the Fiocchi family and Charme Capital Partners, that will maintain the remaining 30% stake thus granting continuity with the Company's 146 year-long history and with the recent development achieved since the acquisition by Charme Capital Partners at the end of 2017. CSG is strongly committed to the continued growth of Fiocchi Munizioni over the coming years, with further international development supported by new investments in all the current factories that will also drive new hirings.

Michal Strnad, Chairman of CSG, commented on the transaction: "This transaction marks a major milestone for the entire CSG, as the investment in Fiocchi is the largest financial investment in the history of our group. Today we become the majority shareholder and partner of a global leader in the field of small-caliber ammunition, with a solid presence in NATO countries. Fiocchi Munizioni, like CSG, has been built by several generations of the Fiocchi family. We consider the Fiocchi family's commitment to the management and development of the company to be a strong asset and we want to further develop the company in close partnership with them. We also deeply appreciate and respect what Charme Capital Partners has been able to achieve over the last five years, and we will treasure its precious legacy going forward thanks to its reinvestment as a minority shareholder."

Petr Formánek, Member of the Board of Directors of CSG Group and Head of M&A, said: "Joining forces with Fiocchi is the result of CSG's long-term strategy. We are interested in acquiring companies operating globally that are oriented towards Western Europe and the US, with a strong product and market position, and within one of our group's core industries."

"This acquisition is the basis of a new division of CSG that will be focused on small-caliber ammunition and that we have called CSG Ammo+," added David Štěpán, Member of the Board of Directors of CSG and Investment Director for CSG International Projects.

Maurizio Negro, Fiocchi Munizioni CEO, commented: "The partnership established between Charme Capital Partners and the Fiocchi family has been instrumental in achieving outstanding growth and international expansion over the last five years. This was also made possible thanks to all the people that work for Fiocchi Munizioni and share a true passion for what we do every day. We are now pleased to become part of CSG, with whom we share a deep industrial and international culture. I am sure that this new chapter in Fiocchi Munizioni's history will be marked by continued solid growth and by a further strengthening of our leadership position worldwide."

For inquiries or corrections to Press Releases, please reach out to Cision.
✕
× Close Ad